But something troubled me. I had shown a decent (not as good) relationship with number of project views and dollars raised. In some ways this made more sense, as a huge number of project page views might mean there was something inherently awesome in the project that might mean each individual donor might give more money.

Do both number of page views and number of contributors jointly play a role in determining how much money a project raises? Understanding both might help guide further explorations into what sorts of activities either just bring in more raw page views, or bring in more actual contributors. I.e., do we need to worry about quantity of viewers or quality (willing to open their wallets) of viewers?

First I thought maybe there was some interaction effect – $ = project page views * # of contributors. But, when I tested that model, no dice (F test p>0.2).

Still, it seemed to me something else might be going on there to explain total amount raised. Maybe the signal from page views to total raised was clouded by number of contributors, and that there is some additional information about the quality of a project or the quality of its outreach that explains total amount raised after the signal connecting pageviews to donors is taken out. Maybe there is a direct and indirect effect of project page views on total raised.

And that means we need to do some Structural Equation Modeling to tease those apart. Oh yeah, baby. Time to get my lavaan on. (For those who don’t know me, I <3 SEM and even teach workshops in it). (Also, for those who don’t know SEM, which is probably most of you, it is a technique that, among other things, allows one to build multivariate models that address the strength of direct versus indirect effects.) 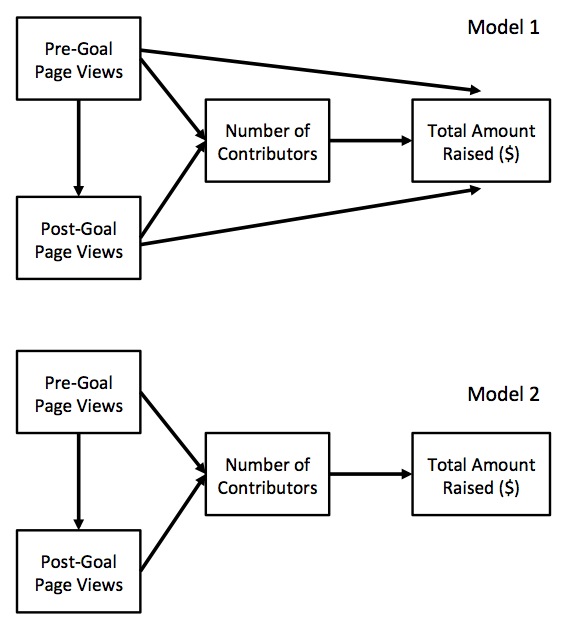 Note – I thought perhaps post-goal page views might be a function of pre-goal, so I included that path in both models.

For a test of mediation, for the non-SEM-nerds in the house, one runs both models, and then compares their Likelihood Ratio Chi-Square values. If they are not different (typically p>0.05 – that’s right, greater than!), one goes with the simpler model.

So….I ran the models (on the data without the outlier from before) and did the test, and, indeed, dropping those direct paths from project page views to total amount raised doesn’t affect model fit. So it’s all about indirect pathways from page views -> contributors -> $$$. There’s also no real relationship between pre- and post-goal page views, so I dropped that as well. Here’s the final model.

I feel quite good about this, as not only is the R2 for total about 0.86, but, it’s 0.81 for contributors. This model explains a lot of what is going on in the data.

Now, there are a few open questions and issues left – 1) ok, so, given the data we have, what leads to pre and post-goal pageviews? Can we quantify that good outreach? Also, 2) It’s still possible that we need to fill in some additional variables here – things about a proposal or the kinds of people coming in as viewers that modify whether they are likely to go from just viewing a page to becoming a contributor.

Still, a good baseline model, and a lot to chew on.