I often get asked the utility of having a science blog. As a practicing scientist, what do I get from putting in the effort to maintain my blog? University’s don’t seem to be too concerned about it. And yet, I feel like blogs have so many rich roles they can play in the life scientific – from building and maintaining communities within science to disseminating and growing ideas to basic outreach.

Ah, yes, outreach. Coupling your science to the society around you. Given that bringing people into your science is necessary to crowdfund your research, perhaps #SciFund can provide at least one tangible metric of the importance of scientific blogging. Will having a scientific blog help fund a #SciFund project?

As we’ve seen, to understand how well a project is funded, we need to know how many eyeballs are coming in to view a project. A blog can be one key portal to bringing folk in to see your project. In particular, a blog can be HUGE early on, as once your project goes live, it can be an access point through which you can funnel your readership to your project.

This leads to two predictions: 1) having a blog should bring in more page views and 2) the importance of a blog will probably diminish over time. So, it shouldn’t really explain the number of contributors after you are successful.

OK, let’s put this to the test! Because we had only a few projects top 100%, I’m going to separate the pre- and post- goal analyses, and only run the post-goal analysis on, well, projects that hit their goal! I’m also excluding one whomping outlier on pageviews. Both of these models are just comparisons of means – # of page views with v. without the respondent having a science blog. But, because you can’t have negative views, and the variance collapses ’round 0 and some overdispersion, we’re using a Quasi-Poisson error distribution – so, a generalized linear model with a Quasi-Poisson error and an identity link for you fellow stats nerdizens. 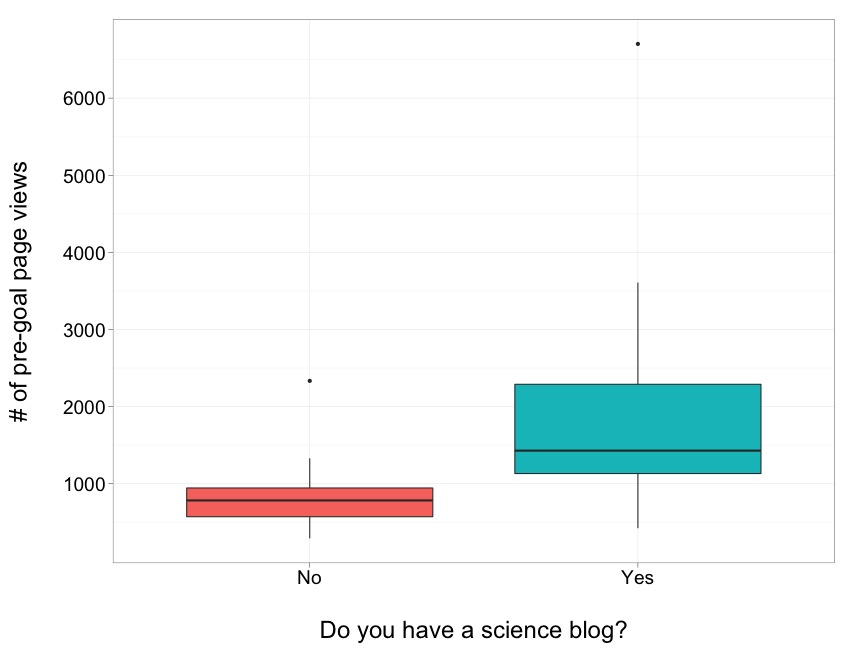 OK, so, eyeballing it, it certainly looks like having a blog does indeed make a difference. Running the numbers, yes, indeed, blog matters (LR Chisq=14.35, p<0.0001). On average, if you didn’t have a blog, you had around 840 page views. But, if you did, you got 1000 more page views. Referencing our previous model, that’s $600 more just for having a blog. However, I’ll point out that our dispersion parameter was quite large, and, indeed, looking at the % of variance retained by the model, it was only about 20%. So, there’s a lot more going on here. But a blog is one piece in the story of success for a #SciFund proposal. Particularly if your target is small, in the sub-$2000 range, having a blog can make all the difference.

Some of you may well ask, “How active does my blog need to be?” Well, most #SciFund participants were fairly active, with on average about 5 posts per month – although posting ranged from once to 30 times per month. A good spread, but, notably, no one posted less than once a month. So, we had a lot of decently active science blogs. Still, did that matter?

In a word, no. Monthly postings bore no relationship with pre-goal page views (LR Chisq=1.048, p=0.31). So, while having that online presence is crucial, you don’t need to be super-active with it. Just enough to maintain a regular audience (argh – why did we not ask for hit stats!) 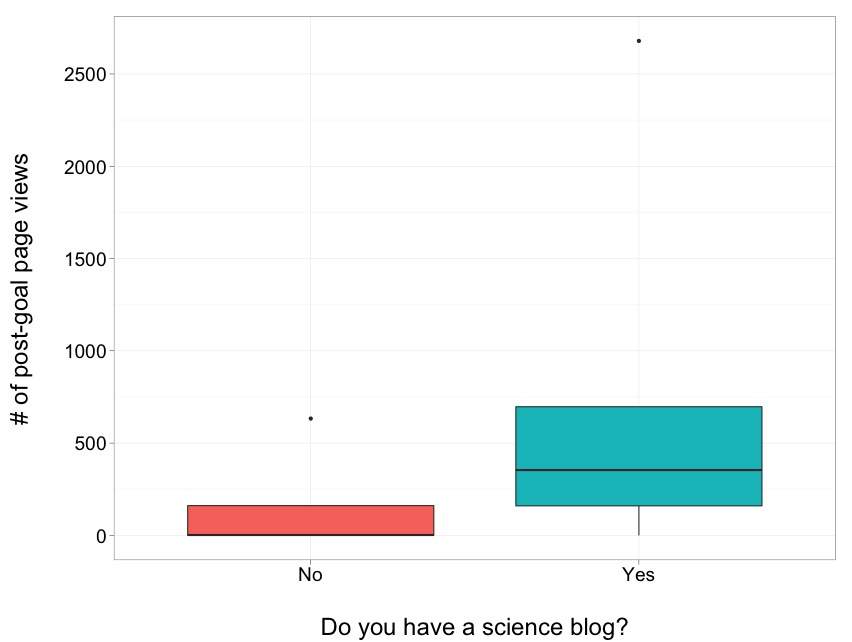 Here again it looks like having a blog helps. Eyeballing the data, it’s because, with one exception, those projects that were successful but did not have a blog had almost no post-goal page views. They pretty much dried up after success. Those that did have a blog varied wildly, but almost all had at least a few hundred views. Statistically, though, this translated to bupkiss (LR Chisq=1.6801, p=0.195). There is too small of a sample size and too much variation to pull out anything meaningful from this data. It looks compelling, particularly given the pattern, but, eh, it’s quite hard to say.

Although, I’ll admit, I was surprised at the difference between the two categories. So, my mind remains open, and I’d regard hypothesis two as still not quite settled.

Overall…
Overall, while it is only one piece of the pie, having a blog helps to bring in more project page views early on in the process. And if those views lead to a project achieving success, then as we’ve seen, the number of dollars per page view only increases afterwards. So, being established at doing this one form of outreach breeds success in the world of crowdfunding. Which makes me wonder which other metrics give an indication of how well folk did with their outreach?

As a final point, folk were posting at least 4 times monthly to their science blogs. Having a blog with one post and just letting it languish out there on the interwebs? Not a recipe for success. To generate an audience that will then go and help support your research, you need to put the time, effort, and work into making your blog something useful. Which, really, is time, effort, and work into doing good science communication – the rewards clearly go beyond just crowdfunding!