Recently, I was asked some questions about Goals for #SciFund participants that I hadn’t investigated since round 1. Namely, what’s do people usually ask for? Which of course led me in a few directions.

First, what do folk ask for?

So, the goal has is kind of bouncing around a bit. To see that visually: 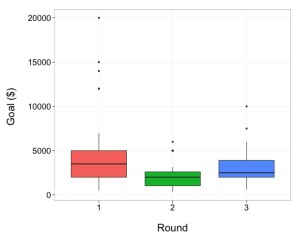 Of course, this got me thinking – has the relationship between goal and success (weak in R1) ever really meant anything? Is it changing? So, I ran a quickie analysis…In general, it appears that larger and larger projects are hitting their 100% goal over time. 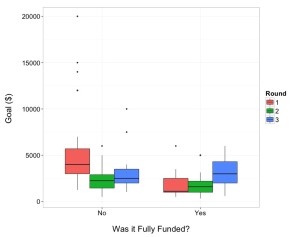 The analysis agrees – looking at how the observed log(Goal) was predicted by whether or not a project was funded at 100% and what round it was in, there’s an interaction between funded status and round. Basically, the analysis says the same thing as the plot – as we’ve progressed, bigger and bigger projects are hitting 100%!

gist of code to generate the above

2 comments on “#SciFund Crowdfunding Goals and Success”Add yours →