Today’s post is about how having a crowdfunding project, such as Serengeti Live from R2 of #SciFund, can lead to opportunities larger than you may have ever imagined. If it inspired you, check out the current effort to Save Snapshot Serengeti and kick a few bucks to this #SciFund alum that is doing amazing science!

My collaborator, Ali Swanson, participated in the first #SciFund Challenge back in the fall of 2011. Her research focuses on understanding how lions, hyenas, leopards, and cheetahs manage to coexist in the Serengeti, where dietary needs overlap and adults will readily kill the young of other species. In order to better understand these predators’ dynamics, she took a novel approach: she set up a large camera-trap grid over 1,000 square kilometers of central Serengeti.

Despite the minor setbacks of having hyenas occasionally crush the cameras, elephants use them for pitching practice, and baboons turning them off, she was quite successful in getting images from the camera trap network. Many images. In fact, she was so successful that she began to drown in images, as each one needed to be looked at individually to determine what species it contained.

She started recruiting undergrads and then Minnesota Zoo supporters to help her. She built a website called Serengeti Live to enable fast data entry. And then she took the #SciFund Challenge and launched a campaign to raise $14,000 to get dedicated internet connectivity from the Serengeti. While she didn’t reach her goal, one short email received during the campaign would turn out to have major consequences for the camera trap project.

Jonathan Brier, then a master’s student specializing in social computing, had discovered Ali’s campaign. He emailed her out of the blue, curious about the project’s data processing scheme, and offered a suggestion. He wrote:

“Are you were familiar with Zooniverse and their efforts for tagging photos of space to identify objects? They have an interesting platform that is growing for the purpose of harnessing interested parties to participate in needed solutions.”

As it turned out, that was around the time I joined the project and we were trying to figure out how to scale up the image identification task. At a million photos per year, even with undergrads and zoo supporters, the pictures were coming in faster than they were being identified. We had never heard of the Zooniverse, which had dealt primarily with astrophysics projects, but we looked into it. And we liked what we saw.

By the spring of 2012, we had formed a collaboration with the Zooniverse, and this past December, we launched Snapshot Serengeti, which invites anyone with an internet connection to help us identify African animals. 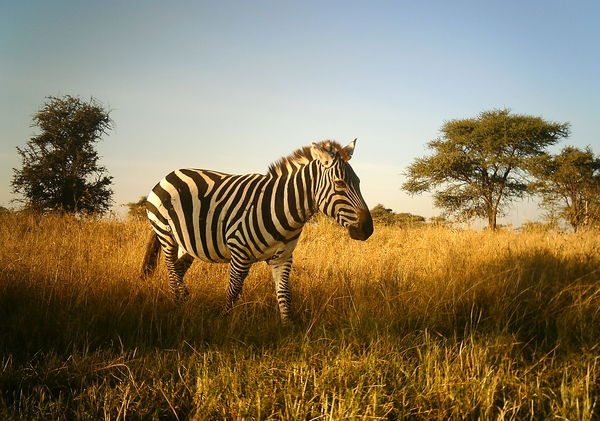 The project has been amazingly successful. Within ten days of launch, over 15,000 volunteers had identified a year and a half’s worth of images. It took them three weeks to finish off the next six months. The site was then on hiatus from February to June because we had no more images to look at! Now we have got another year’s worth of images online and available to identify and our thousands of volunteers are chugging through them. All this work – months and months of person-hours – thanks to a single, generous email made possible by the #SciFund Challenge.

Now we have come full circle. With volunteers focused on animal identification, we can focus on the science. And the fundraising. No one needs to point out that the funding climate is tough right now; our most recent NSF pre-proposal was rejected. And so we are taking a multi-pronged approach to keeping the camera traps running. One of those prongs is a crowdfunding campaign that we have recently launched called Save Snapshot Serengeti.

We have taken the wisdom of the #SciFund Challenges to heart and have made the campaign into a bit of an experiment. With over fifteen thousand participants and several hundred motivated enthusiasts, can we raise more than the typical few thousand dollars? We hope so. Our goal is $33,000, and we are already a quarter of the way there.

You can help. And we have some fun thank you perks if you do: ever wanted to have a photo of yourself with a lion? Check us out at Save Snapshot Serengeti. And please pass the link (http://www.igg.me/at/serengeti) around to your family and friends, even if you think they might not contribute. Who knows what might happen this time.

Margaret Kosmala is a Ph.D. student at the University of Minnesota, studying the effects of global change on ecological communities. She tweets (infrequently) at @margaretkosmala and blogs weekly about Snapshot Serengeti. She may even start her own blog once her pesky dissertation is out of the way, sometime this fall. She and Ali will both be at the Ecological Society of America meeting next week and would love to chat.

2 comments on “More than Money”Add yours →