Welcome to week 1 of the #SciFund challenge! That’s right, ladies and germs (and gents), it’s on like Donkey Kong. It’s in like Flynn. It’s up like…damn, I’m not really sure.

Yesterday, Jai and I welcomed the 240 intrepid scientists who are participating in the #SciFund challenge with a lengthy ‘here’s-what’s-going-to-happen’ email and probably more details and deadlines than they ever thought possible. We’ve received back loads and loads of excitement.

This is going to be fun.

But before we move forward, you may well ask, “OK, who are these 240 insane scientists who are going to try and crowdfund their research?” And, well, I’ve got the answers for you! And I think these answers demonstrate the power of social networks (at least my network and Jai’s!)- something useful for going forwards for the participants in #SciFund.

First off, what professional level are most scientists in the #SciFund challenge?

While most participants are grad students, ever eager to find some cash for their work, there are actually a fair number of postdocs, professors, and professional research scientists mixed in as well. We also have a few NGO scientists, and even two brave undergrads. Good luck, you guys! And good on you for getting into the funding game early!

Second, what disciplines will be represented within the challenge? 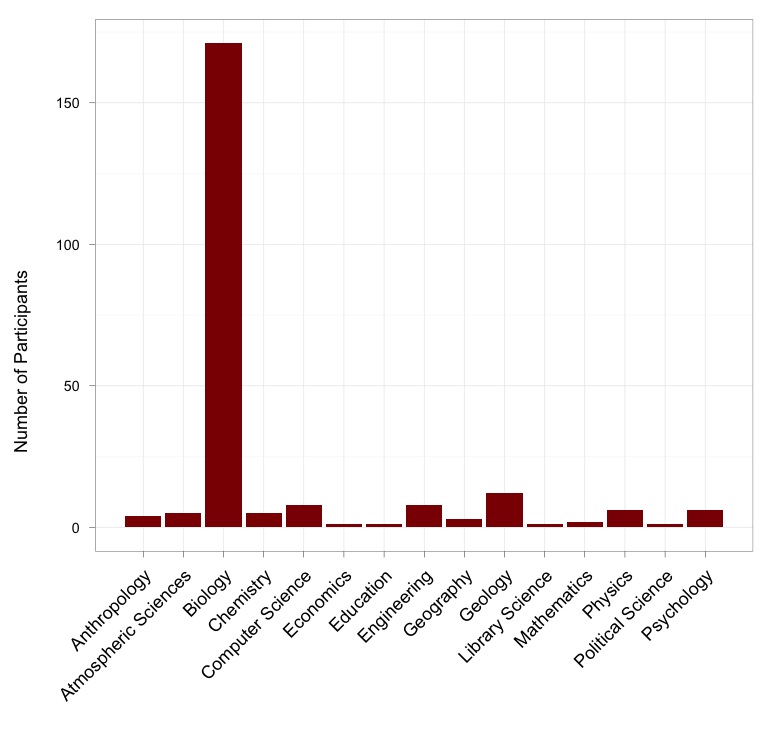 The short answer is: Biologists. By a landslide. Why, you may ask? Well, it’s simple. Where do Jai and I work? The National Center for Ecological Analysis and Synthesis. Where do we have connections, and what kinds of scientists are most likely to be in our social networks? Biologists! Granted, we have representatives of a wide number of other disciplines. However, you can clearly see the fingerprint of me and Jai cooking up this project. Or biologists are just awesome. Ha!

But let’s dig a little deeper.

The second place you can see the fingerprint of Jai and my social networks is what KIND of biologist was most likely to join the #SciFund challenge.

Ecologists. Lots and lots of Ecologists. Again, where do we work? The National Center for Ecological Analysis and Synthesis. Social networking in action, my friends.

Which leads me to my last question. What KIND of ecologists?

It seems like a pretty even mix of marine and terrestrial folk. Which….well, I’m a marine ecologist. Jai is terrestrial.

Although. Although…… I have to admit. As I went over the spreadsheet of participants, while I know several of you guys personally, I’d say that number is about 5%.

So I have a theory (it could be bunnies!).

Jai and I sent this announcement to numerous mailing lists, blogs, etc., I’m guessing that a few people who knew us signed up. But, more than that, people that knew us forwarded the announcement on. Pepole that did not know us (physicists, mathematicians, most paleoecologists) did not forward the announcement. Hence the distribution of disciplines. I could be wrong, but I think it’s a decent theory.

So, that’s who we are. 240 scientists, marching forward, trying to get our work crowdfunded. So, keep your eyes glued to this blog as the 240 participants themselves begin talking about their thoughts on crowdfunding and their experiences as part of the #SciFund challenge!

N.B. I made these categorizations from the information sent in by the #SciFund challenge participants. There were definitely a few judgement calls in how I broke things up, but, nothing that I think will affect the main conclusions of the whole shebang. I considered doing some fancy-pants statistics on this data and testing robustness to conclusions. Then I realized that I had 4 job applications and a paper to finish. Fancy pants will have to wait until later.

7 comments on “Who is the #SciFund Challenge?”Add yours →