Note from Jai: Dr. Shermin de Silva is an elephant researcher and she has a project in the #SciFund Challenge (check out Help Elephants & People in Sri Lanka). She has a doctorate in biology from the University of Pennsylvania and she is the founder of  the Elephant Forest and Environment Conservation Trust.

During my six years in grad school slaving over grants and statistics, I avoided starvation thanks to the lunch trucks hovering around West Philly.  They sell everything from vegan chili to doner kebabs, rescuing hundreds from this predicament each day. I used to be puzzled at why there were TWO Mexican trucks competing side by side.  Everyone seemed to know which one was better –you could tell from the lengths of the lines.  Wouldn’t the other want to move off to some remote corner and claim its poor victims all to itself?  In stark contrast to this was the strategy of the ever-elusive wandering cupcake truck – a beast that was seldom spotted, brightening up random corners on each day.  Well, you couldn’t count on a cupcake for desert, but you could always count on the burritos. It was soon obvious why the trucks clustered – crowds.  Competition, yes, but also access to customers attracted by 1) reliability and 2) variety.  Because what else does a great big cluster do?  It draws attention: advertising. You can probably see where this is going.

We’ve observed this phenomenon for some time in animal behavior, it’s called ‘lekking’.  In some species, one  sex (usually males) gathers around parading with everything they’ve got.  Bring out the fancy feathers, pointy horns and high-flying acrobatics!  Then the other sex goes about choosily examining the goods.  Why do animals go to such lengths? Again, it comes down to advertising.  There are at least two popular reasons that people think animals do this – there’s the ‘hotshot’ hypothesis, where lesser individuals try to get a piece of the action by hanging about near the superstars; and then there’s the ‘hotspot’ hypothesis, where it’s the real estate itself that is irresistible.  They’re broadcasting as energetically as they can “I AM AWESOME!  PICK MEEEEEE!!”

OK, so you want to know what all this has to do with #SciFund.  I’m getting there.

Crowdfunding of course has a lot in common with what I’ve just described.  It’s been tried to a limited extent in the nonprofit sector, but it’s really taken off in microfinance, popularized by sites like Kiva.org, where I got into it.  Then came similar sites dedicated to the arts.  There is are several critical differences though among these ventures.  With microfinance, you lend money which is almost always paid back to you, which you can lend out again and again and again.  This keeps people coming back.  With everything else, once donated the money is GONE.  The motivations of donors differ – some purely want to do some good in the world though they may never see the product, whereas the others are want a concrete outcome, some token of which they will receive.

It takes trust.  The animals have evolved signals that are hard to fake – brighter feathers really mean a healthier bird.  But not so with human enterprise – you’ve got to trust that the borrowers won’t default on their loan, and you’ve got to trust that the musician, artist, or film maker does what they say they are going to do.  How do you know?  Nonprofits are screened thoroughly by the sites that host them.  The micro borrowers have been screened by a middle man.  Everyone else…well, you’ve got to take it on faith.  What about scientists?

Hmm… how do I know you’re not just going on a nice safari vacation? This was one concern I’ve come across from a few different people.  Unlike the arts, science doesn’t necessarily produce a very tangible result – which is likely the case for many small projects being promoted through things like #SciFund.  If we’re going to appeal to the crowds as scientists, we’ll have self-regulate beforehand and make sure everyone’s genuine.  If #SciFund persists, this is something it will have to do.

There are a number of benefits to maintaining a banner like #SciFund in the future rather than each of us pursuing campaigns on our own.  First, we can potentially attract more attention by working together rather than as individuals – we appeal to a broader audience and more sources of media.  Second, as we have seen, we’ve got collective bargaining power with our online hosts.  This is also the power of crowds.

But I see a bigger challenge: ADVERTISING.  The promise of crowdfunding is that you should be able to reach vast audiences you never would otherwise.  This is how sites like Kiva are so incredibly successful – loans are fulfilled sometimes almost instantaneously.  How do they do it?  Note a key difference between the microfinance sites and everyone else: it’s Kiva that does its own advertising.  A farmer sitting in Ecuador is not hunched over his or her nonexistent computer frantically publicizing their loan request to the cybercrowds – they simply don’t have the time or resources to do that.  In contrast all other ventures expect that we should be our own marketing team, promoting ourselves constantly.  I find this very disconcerting.

What I find even more disconcerting is that a central part of the game plan is to seed yourself first to friends and family.  Now if I wanted to appeal to them, I could do so directly and spare ourselves the commission.  In fact a few people have actually asked me this, being distrustful of websites that could target them for spam. But the purpose of going through a third party is precisely to reach others whom you would not otherwise.  How have we been doing at appealing to people we don’t know?  Here are some early numbers: 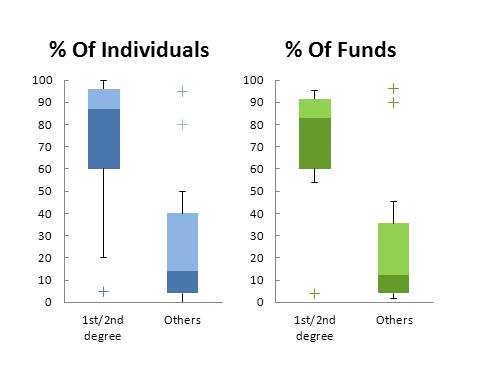 So most of our funding is coming from people we already know, or good friends of theirs.  If we want crowdfunding to be a viable source of funding for science, we have to be able to get beyond that. Because a scientific project isn’t going to end with a one-time investment – it takes periodic injections of funds.  You can’t trouble your social network each time you have a new need.

So what’s the solution?  I think #SciFund needs to become something like an annual event, PRECEDED by lots of advertising and fanfare to generate interest before it even launches.  I’m talking banners and billboards, a small investment in advance all over town to create regular anticipation.  We need people saying – what cool new things will they come up with next?

Second, I think the websites themselves need to do a lot more of the advertising themselves – we have other things to do.  Unlike a performer, who might be able to plug their page to a different audience every night they’re on tour, most of us have workloads (which includes writing all those other grants) which preclude a publicity campaign.  This can hobble our projects however worthy they might be.  As it is the hosting website is making more money off exhibiting a short-term project than most webhosting services charge for one year of hosting an ENTIRE website.  They would make more money and have more repeat customers if more of the projects were successful.  I think these sites will only be sustainable in the long-term if they cultivate a following – like people who donate regularly to charity or microlend.

This begs a final question – is it right to profit from people raising money for science that is itself non-commercial?  Having to pay taxes on top of everything seems a bit perverse, especially given the fact that scientists are turning to crowdsourcing their funds because public – i.e. taxpayer – funding of science is itself is in decline.  Some worry that crowdfunding, if at all successful, might serve as an unwitting argument for privatizing this funding even further. It seems like a non-profit model (like that of microfinance, which works with agencies that are not themselves nonprofits) is much more reasonable, one that benefits from trying to ensure that every project is funded.  I don’t know what it would take for that to work – one of us may have to try to get on Oprah (which is what rocketed Kiva to fame).  So can crowdfunding work for science?  I still think it has a lot of potential, but it will take some persistence and careful strategizing to get this bird to fly.

2 comments on “The Food Truck Phenomenon – or, what animal behavior tells us about crowdfunding”Add yours →