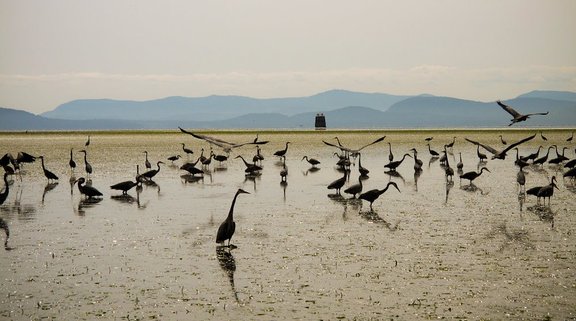 BEHOLD THE POWER OF SEAGRASS!

No, really, behold it. Ross Whippo. Segrasses around the world are an incredibly sensitive habitat. They’re on the decline globally. And yet, we don’t know the full extent of the consequences. Sure, we know a bit about fish nurseries and such, but Ross is proposing to do something a little different – look at how seagrass, as a source of energy and nutrients, links the land and the sea. After all, when seagrass washes up onto the shore, it fuels a big food web that goes from insects to spiders and on into birds. Cool stuff!

I admit, I’m a sucker for these kinds of studies that look at how resources from one ecosystem can fuel another. So, for me, this is a cool project on scientific grounds alone. And I kind of love that one of the rewards is his hand-written field notes. I mean, how cool would it be to have, say, E. O. Wilson’s original field notes.

But more broadly, Paul is a new Masters student at UBC. Funding this project is going to be vital to his education and the success of his thesis.

Not only that, but by Paul participating in #SciFund, we’re helping to breed a new generation of scientist – scientists for whom engaging with the public at the very start of a new line of research is routine. In Paul I see a bright shining new future for engagement between science and society.

So why not head on over and support the next generation of scientists.