Using Twitter to advance your science and your career

END_OF_DOCUMENT_TOKEN_TO_BE_REPLACED

There is a secret Twitter tool that only a select few know: lists. It's a bit surprising that they are so little used, because they are among the most useful features that Twitter has to offer. What does a list do? Well, wouldn't it be great to be able to see all of your audience's tweets in one place, rather than having to check each account separately like a dope? That's what lists allow you to do. With lists, you can group together in one place all of the accounts that connect to any given audience or topic. Do note that you can't really use lists on the mobile app (you'll need the desktop version of Twitter).

All of this might seem rather abstract, so let's go with an example. Let's return to the awesome astrophysicist Kate Mack (@astrokatie) who happens to have created her own list of women in physics, astronomy, and related areas. Below you can see a very partial listing of the people that she added to this list.

And here are their latest combined tweets:

By the way, you can see if someone has created any lists, by checking out that person's Twitter home page (all the way to the right in the image below).

So, how do you create your own list anyway? The first step is to click on the small version of your profile picture in the upper right of your own Twitter screen (you'll need to be logged in for this to work). In the menu that appears, select Lists.

In the Lists page that appears, look for the Create a List box (its precise location on the page depends on your screen, but it looks like the image below). Hit Create New List. 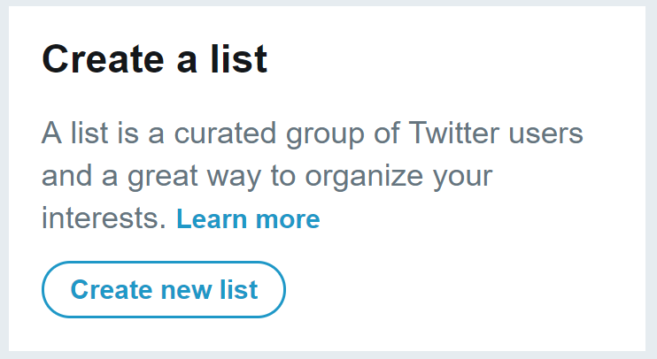 The following screen will let you name your list as well as select whether your list will be private or public. This privacy setting actually matters! A public list is visible to everyone and anyone added to such a list will be notified that this has happened. A private list is visible only to you and those added aren't notified.

Congratulations! Your list is now ready to go. Now all that you have to do is to add in Twitter accounts, which is simplicity itself. On the home page of an account that you'd like to add, look for three vertical dots to the right of the screen (to the right of the Follow button). If you click on those dots, the ensuing menu will allow you to add that account to a list (see image below).

Once you have created your list, how do you keep track of what's going on there? Well, let's go back to your own Lists page (hit the small version of your profile picture in the upper right of the screen).  Here, you'll see all of the lists that you have created (public and private). If you click on any of the lists, you can see both the members of the list as well as their combined tweets. Easy peasy.