If you are a Doctor Who fan, you’re probably already familiar with the Weeping Angels; if you’re not, head to Netflix immediately and start with Season 1 of the 2005 reboot. This article will still be here when you emerge, bleary-eyed, a week later after the ensuing binge. Trust me; it’s worth it.

For the still uninitiated, however, the Weeping Angels are a race of aliens in the Doctor Who universe that are described as “quantum-locked.” When you are looking at them, they appear as stone angels, the kind you might see often around gothic architecture. The second you look away, however, they are free to move, able to exist in their natural state. Upon contact, they can either snap your neck, killing you instantly, or send you back into the past, feeding on the “potential energy” of the life in the present you could have lived. 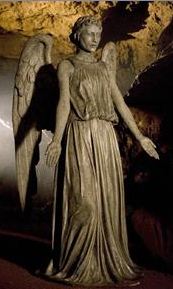 While Doctor Who, like most other SciFi serials, often spouts random scientific-sounding words to explain convenient plot devices (“reverse the polarity!”), the Weeping Angels are actually based on a fascinating phenomenon called the Quantum Zeno Effect. (Warning: If you’re not comfortable with words like eigenvalue, the Wikipedia article linked to here is probably too technical.)

Before I go any further, I want to give another important warning. Whenever anyone without a degree in Physics, Chemistry, or a related field of engineering uses the word “quantum,” it’s safest to not believe anything they say next, as it’s likely complete malarkey. I currently have two degrees in Physics, and you should still be highly skeptical that I will succeed in being 100% accurate in what I’m about to explain to you. Quantum mechanics is weird, and while I can write down a bunch of equations for you that will be 100% correct, I may lose something while translating the ideas into English. I’m going to use metaphors that probably aren’t 1:1 with the truth.

The fundamental reason for this is that our macroscopic world, the one you and I interact with every day, is nothing like the world ruled by quantum mechanics. Quantum particles behave both like particles and waves, which leads to some pretty strange things. For example, if you conduct an experiment where you drive your car off a cliff, you pretty much know how that’s going to end. But if you do the same sort of an experiment with an electron, there’s a good chance it will just bounce back, depending on the height of the cliff. Similarly, if you drive your car into a building, your car is never going to pass through unharmed. But electrons can tunnel through barriers, and any college junior who’s taken a quantum mechanics course can calculate the probably of it doing so just as easily as you can predict the probability of your car doing so.

So in this mad quantum world, we get really cool things like the Quantum Zeno Effect, which lead to awesome SciFi monsters like the Weeping Angels. So what is the Quantum Zeno Effect? Basically, it says that a watched pot never boils, if the watched pot is a quantum system. If you keep measuring a quantum system is some state, that state will never be allowed to change. The name comes from Zeno’s Arrow Paradox, where if you watch an arrow in flight and look at any single instant in time, the arrow appears motionless. You can pick any point in its flight, and at that single point, it’s occupying a single point in space which is not changing. So how can the arrow be both in flight and stationary at the same time?

It’s well known that observing a quantum system changes the system. In the Quantum Zeno Effect, this is turned on its head a bit since the change induced by measurement is that we can keep the system from changing. Let’s look at an actual experiment. There have been a lot of experimental verifications, but I like the 1990 paper by Nobel laureate David Wineland because I suspect the secret to his genius is in his mustache. 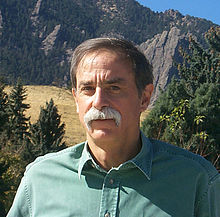 He took a collection of laser-cooled Be+ ions, excited them to a higher state by applying a radio pulse, and measured which state they were in using scattering from a high frequency pulse. He found that he was able to prevent the ions from being kicked to the higher state just by observing which state they were in. Now, that explanation might sound a little dense, and the details are complicated. So, I’m going to try to explain the idea in a distinctly non-scientific way.

Say you are trying to kick a ball up onto a table. The ground is the lower energy state, and the table is the higher energy state, because up there it’s subject to the pull of gravity. If you kick the ball with the right amount of force, giving it the proper amount of energy, you should always be able to get it up onto the table. But then, your friend comes by and looks at the ball, and despite the fact that you’re still kicking with the same force, the ball just won’t get up and stay on the table.

That clearly makes no sense whatsoever, but at the quantum level, that’s essentially what happens. Bringing this back to the Weeping Angels, that means that when unobserved, they exist in a state that is free to move and evolve, which in this case potentially involves time murder. However, if they are continuously observed, they can never move. But the moment you blink- well, you can blame quantum mechanics for what happens next.

Fireside Science is an ecology blog for everyone!